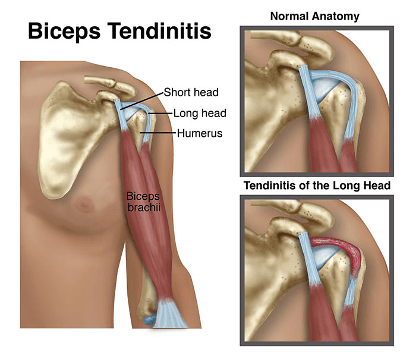 The biceps muscle is in the front of your upper arm. It has two tendons that attach it to bones in the shoulder. The long head attaches to the top of the shoulder socket (glenoid), and the short head of the biceps tendon attaches to a bump on the shoulder blade called the coracoid process. 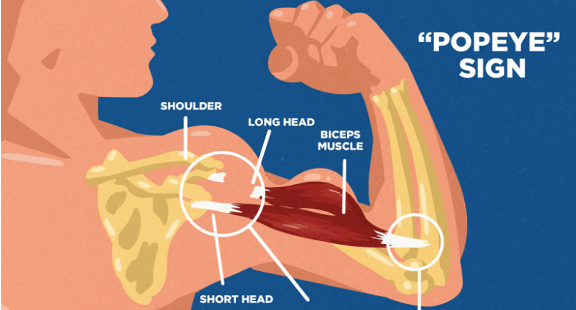 Biceps tendinitis is inflammation of the long head of the biceps tendon. In its early stages, the tendon becomes red and swollen. As tendinitis develops, the tendon sheath (covering) can thicken. The tendon itself often thickens or grows larger. The tendon in these late stages is often dark red in color due to the inflammation. Occasionally, the damage to the tendon can result in a tendon tear, and then deformity of the arm (a "Popeye" bulge in the upper arm). In some cases, there is also damage to the rotator cuff tendon.

In most cases, damage to the biceps tendon is due to a lifetime of normal activities. This damage can be worsened by overuse — repeating the same shoulder motions again and again. Many jobs and routine sports activities can cause overuse damage.

X-rays will be taken to ensure there are no bony abnormalities, such as arthritis. In many cases, an MRI may be ordered to evaluate the biceps tendon in greater detail.

Nonsurgical Treatment
Initial treatment is nonsurgical. These treatments include:

If your condition does not improve with nonsurgical treatment, surgery may be an option to relieve your symptoms and correct any structural abnormalities. 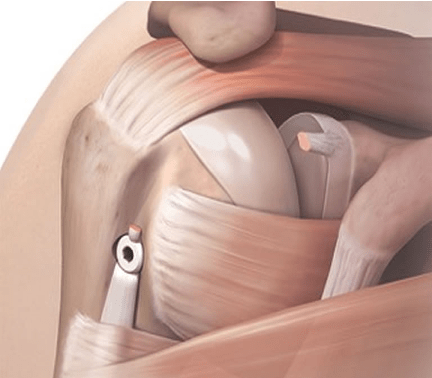 Surgery is performed using a minimally invasive approach using a camera (arthroscope) and small instruments into your shoulder joint. This is a outpatient surgery that allows you to go home the same day of surgery.

Rarely, the biceps tendon can be repaired where it attaches to the shoulder socket (glenoid). In most cases, the damaged section of the biceps is removed, and the remaining tendon is reattached to the upper arm bone (humerus). This procedure is called  a biceps tenodesis. Removing the painful part of the biceps usually resolves symptoms and restores normal function.

In cases of a biceps tendon rupture, which results in a Popeye bulge in the upper arm, an open approach using a small incision in the front of the arm to repair the tendon may be necessary.

If there is any damage to the rotator cuff tendons or arthritis at the AC joint, this will be addressed at the same time as the biceps tendon repair.

If there are no other structural problems in the shoulder, you will wear a sling for approximately 4 weeks, and you will do physical therapy. No strengthening will be allowed for 6-8 weeks after surgery to allow the tenodesis to heal and avoid reinjury. It’s crucial during this time to avoid lifting anything greater than 5-10 pounds.